As long-time Jemal-watchers are probably aware, I read a lot of comics. I have thousands of single issues in my basement and have read thousands more. I’m not the biggest comics fan by a long shot, but it’s safe to say I’ve read, thought about and enjoyed more comics than most people. I’ve given away more comics than the average person has read. And let’s not even think about how much I’ve spent.

With that said, I’m also not the world’s biggest Superman fan, but I’ve read quite a few Superman comics. Like all things, comics obey Sturgeon’s Law which states that 90% of everything is crud. You can’t continually publish at least 2 monthly comics about a character for over 70 years without turning out some stinkers, even with a marquee character and marquee writers and artists. But by the same token, they don’t publish that many stories about a character for that long because they’re boring—there are a lot of great Superman comics. Say it’s the law of averages, a blind squirrel finding a nut, whatever cliché you like: it seems obvious even to an outsider that given his publication history and cultural ubiquity, there are probably some pretty good comics about Superman, right?

And yet, that’s not the conventional wisdom about dear old Supes. Somehow, the stock response to any discussion is some combination of:

What’s strange is that this response is most common from people that have read fewer than 10 Superman comics. This isn’t an expert opinion, it’s a reflexive one: “I don’t read this, therefore it’s bad.” “If Superman were interesting, I’d have read more comics about him.” “I don’t have to try asparagus Mom, I know that I don’t like it!”

Not exactly the work of an expert logician.

How has an uniformed opinion like this gotten so popular? Partly because it’s been repeated so much. That’s how the conventional wisdom works: it’s true because everyone says it. Poll any comics shop and somebody (with a stack of shitty, shitty Spawn comics 4 feet tall) will parrot this nonsense back to you. But trust me: you don’t want to trust those people. (Or follow them back to their basement.)

Partly it’s because people have generally read more Batman stories, and the best-selling of them all has a boring Superman getting his ass kicked by a grumpy old Batman. People will tell you all day that a super-powered alien’s life isn’t relatable the way that a billionaire orphan with the physical skills of a multi-sport Olympic athlete, a knowledge of every martial art ever created, an eidetic memory, the power to cure his own broken spine through meditation, a backup personality in case he’s ever driven insane, multiple rocket cars, and a series of close friendships with little boys is. I mean, that’s the American experience in a nutshell, right? (I could go on forever on how you’re wrong about Batman, but that’s another screed.)

But mostly the reason that people keep saying such a demonstrably incorrect thing is a mixture of ignorance and arrogance.

The ignorance come from an obvious place: it’s where we all start. Everyone’s opinion about everything starts out uninformed. People aren’t born with an encyclopedic knowledge of Superman comics, and you can’t blame them for that. And frankly, learning about a character with 70 years of history can be daunting! Where should you start? What’s the good stuff? Which of his many, many, many (screw you, DC Comics) origin stories is the best—or at least still canonical?

And part and parcel with that is that Superman is a capitalist endeavor. DC would really appreciate it if you’d pay them for all of that knowledge. Getting up to speed with Superman could cost you a pretty penny. (I don’t want to blow your mind, but you’re probably connected RIGHT NOW to a global information system that could help to reduce some of the costs of catching up on Superman. Ahem.)

But like I said: ignorance is the default. We’ve all met enough Trump supporters to know that we can’t trust ignorant opinions. And let’s be real: almost nobody is entirely ignorant of Superman. We all know that he:

There’s more to him that most people know, but that’s the basics. But that clearly isn’t all that you need to know about a character. What motivates him? What does he need, what does he want, what does he long for? What are the problems he can’t solve? Those are the things we actually care about in characters, and most people have no idea what the answers to those questions are for Superman.

So why do we listen when people who don’t know anything important about Superman tell us that he’s boring?

That’s where the arrogance comes in.

For somebody to believe that millions of people have spent billions of dollars to read, watch, and listen to (you can’t imagine how popular the radio show was) a boring, un-relatable character for coming up on a century requires a lot of arrogance. I think it works something like this:

Believing that Superman is too powerful, too mighty, too awesome to ever face an interesting challenge requires you to believe that you are quite literally the most creative person in the world. I mean, you’ve thought about this for at least 30, maybe 45 seconds, and you didn’t come up with anything! QED, let’s gets some pancakes!

Spoiler alert: you probably aren’t. (But I still like you. And in your defense, pancakes are a pretty good idea.)

What’s particularly galling about this is that it’s so tied up in Superman’s central metaphor: he conquers the impossible.

Once Superman had been on the scene for a minute, it became clear that his stories couldn’t all be about stopping gangsters from robbing banks. He quickly graduated to corrupt capitalists, super-villains and ever-weirder science nightmares. By the 1960s he was running around with a lion’s head, dodging the affections of a mermaid, and shooting smaller Supermen out of his fingers. (Not all at once, mind you.) There were a lot of new drugs available back then, man.

So the problems he solves had to go beyond the difficult: you can’t have Superman lifting a car one week, lifting 2 cars the next week, and just keep adding an improbable number of misplaced automobiles forever. Instead you have him fight the actually impossible: multiple emergencies at once, ethical dilemmas, poisoned relationships, evil gods, cross-dimensional tricksters, profound disconnection from his home, his family, his world. Superman comics, because they star a super-man, need to be super-creative.

That’s half of what’s great about Superman: he’s constantly faced with impossible tasks. One emergency after another, a lifetime of striving, struggling, and fighting to preserve life. Impossible odds and devilish puzzles that would defeat anyone else because they require more than just super-strength, they require creativity and determination.

That’s the other thing that’s great about Superman: he wants things to be better for everyone, and he works to make that happen, often risking everything.

Look, it’s fine to be wrong. I’m not going to waste my time yelling at your kids about how they should try asparagus all day. So why do I care about convincing you not to say uninformed an incorrect things about Superman? It’s because I like you and want you to be better. Maybe, just maybe, if I try hard enough I can help you.

Superman taught me that. 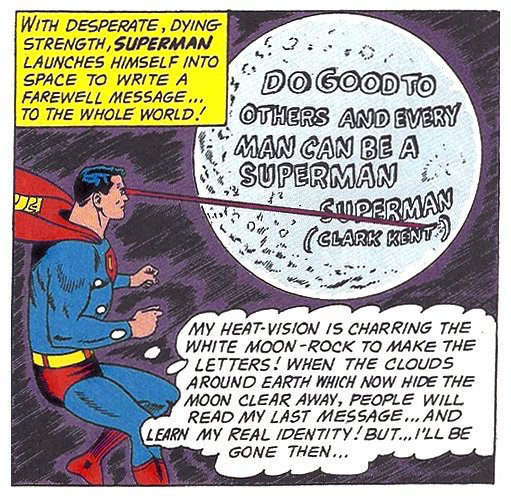