So we’ve covered the failures of computer dating pretty well: hateful algorithms that match you with the exact opposite of what you were looking for, and boilerplate come-ons that don’t exactly seem heartfelt. What about successes?

After experimenting with Match and eHarmony I began to despair. Would I only meet conservatives and robots on the Internet? I was also disappointed when I tried PlentyOfFish, and worried that free sites would only get you what you paid for. I’m not saying that everyone on that site is scary. I’m saying that when I last checked 9 months ago, everyone on the site was scary.

But if there’s one great thing about the Internet, it’s that there’s a lot of it. Eventually I found OkCupid (OKC or OkStupid to the locals), which has an interesting method for matching. Instead of having some 113-question personality test that’s about as useful as a star chart, users of the site can submit their own questions. When you answer a question, you also fill out how you would want your ideal date to answer it, and how important his or her answer would be.

That’s confusing, so let’s try an example. One of the questions might be, “Do you think spanking children is a good parenting strategy?” Possible answers might be, “No,” “Yes,” “Hell YES,” and “CPS has me on speed-dial.” So you’d pick the correct answer (obviously, C), and then decide how you’d want that special somebody to answer (this time also C), and how strongly you felt about their answer on a scale from “Not at all important” to “Mandatory.” (Mandatory for this example, natch.)

After you answer a few dozen questions, you can judge how well you’re suited to another user in three ways. The first is how well they match what you want in a date, the second is how well they match what you yourself answered, and the third is how often you vehemently disagree (like if somebody answered A above - yeesh). These are Match/Friend/Enemy, and it works awfully well. By going for quantity of questions over quality, and by allowing you to decide what you want in a mate as opposed to what some bullshit test-writer thinks is best for you, you get awfully good matches.

Best of all, they had the best looking selection of singles. By a long shot. Seriously. Not that I’m Mr. Superficial, but if you’re looking for a date you don’t find attractive, you might be Doing It Wrong.

I created a profile that expressed exactly how excited I was to be on a dating site (“As a widower raising a teenage step-daughter and a son with autism, I don’t have time for you, and even if I did, you’d be better off dating a wood-chipper”), and started looking around. I was immediately contacted by a young lady who wanted to let me know that she was quite talented at performing a particular sex act, and that if I EVER NEEDED A FRIEND I should contact her. At which point I discovered how to block people.

In searching for dates (26-36, within 25 miles, no god-botherers), there was one girl who stood out immediately: cute, educated, good taste in music and a match of 91/91/0. I know that you don’t have any context for those numbers, but trust me, it’s ridiculous. To agree with somebody 91% of the time, to have them be what you’re looking for 91% of the time and to have no areas of disagreement? Crazy. Especially when you factor in that I’m a difficult person to match.

I know that everyone is a beautiful and unique snowflake, but just like some animals are more equal than others, some people are more unique than others. And let’s face facts, you don’t meet many red-headed single fathers named Jemal who are both ex-military and ultra-left-wing. And you could say that I’m a teensy bit opinionated.

[It’s not that I think that I’m always right. I just think that I’m almost always better informed than the average person, and therefore people should shut the hell up and listen to me, dammit. Is that so wrong?]

But that number is even more impressive, because OkCupid gives you another number: your highest possible match. Based on the number of questions we each answered abd the total number of questions available (several thousand) my highest possible match with this young lady was 95%. Which means that in reality, we were closer to a 96% match overall with 0 disagreement. See what I mean? Ridiculous.

Back to the story: 91/91/0 was a stupid-crazy match number, and the girl it represented seemed really cool. Unfortunately, her profile was even more discouraging than mine: “Taking a break, back in a few months.” Damn.

The site does offer a lot amusements for those who aren’t looking to ask anyone out. The questions themselves are fun to answer, and you get little badges in your profile based on trends in your answers. So naturally, I got “Less pure,” “More Kinky,” and “More Law Abiding.” (Dirty, but not disgusting!) Also, there are a whole slew of silly tests to be taken, and who doesn’t want to compare “Which Firefly character are you?” results with potential dates?

They also have their own blogging setup, and since I wasn’t exactly ready to tell the world (okay, the 6 of you who read this blog) that I was poking around on a dating site, I wrote a few entries there (two of them formed Parts 1 and 2 of this series). Eventually I wrote an entry about smoking. I had gone back to smoking in November of last year, but I’d already started the process of quitting. I’d cut back, seen my doctor, gotten a prescription to help me quit, and started warning my friends and co-workers that I was about to be an unbearable asshole (okay, MORE of an unbearable asshole). But if I’m in this smoking limbo - not quite a smoker, not quite a non-smoker, what should I put in my profile? And who better to answer this question than the OkCupid hivemind?

Lo and behold, who should respond, but good old 91/91/0! For somebody who was supposedly taking a break, she was awfully active on the site. (Not that the guy who didn’t expect to be dating until 2009 should talk.) So I messaged her.

A few dozen emails later, she let me know that she was going to have to retreat from messing around on the internet because she had to finish proof-reading a paper she was writing. I asked if I could help and the next thing you know, I’m spending my evening reading through a bunch of stuff in a field I don’t really understand. Math? Rule of Law? Statistics? After a few hours of this, it occurs to me: I must REALLY like this girl.

So I asked her out. One platonic lunch later, we were dating. She introduced me to Korean food, I forced her to spend time in the suburbs. I made her watch horror movies, she introduced me to the Wire. She met my crazy family, I met her… family.

Nine months later - possibly while you were reading this - I married her. 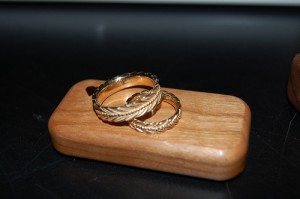 That Internet thing is really starting to work out, eh?